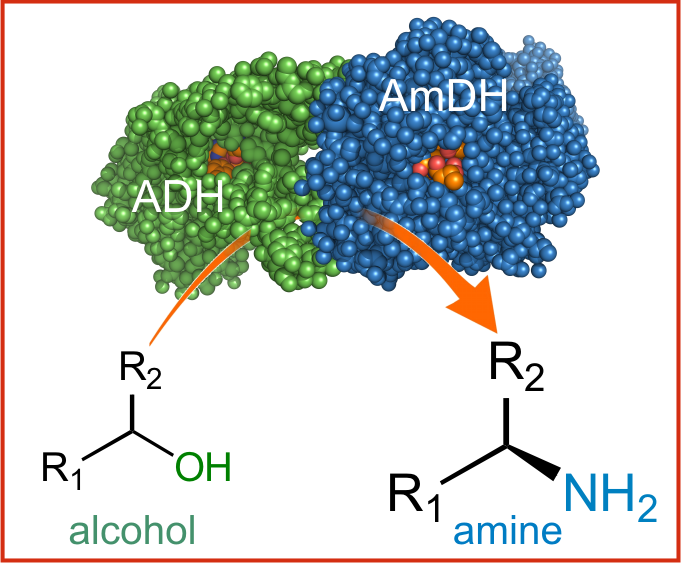 A new biocatalytic conversion route published this week in Science holds a promise for a cleaner and more efficient industrial synthesis of amines which are important chemical starting materials for the manufacture of products as diverse as medicines and plastics. The new sustainable conversion route is based on the concurrent use of two modified enzymes and was developed by Francesco Mutti and his coworkers (Biocatalysis laboratories at the Van ‘t Hoff Institute for Molecular Sciences of the University of Amsterdam) in collaboration with the University of Manchester and BASF.  The new ‘artificial enzymatic pathway’ can facilitate the use of biomass as a sustainable resource for amines, replacing oil.

Making chemical processes more efficient in terms of energy and waste often depends on the improvement or replacement of the used catalyst. Traditionally these auxillary substances consist of rather simple and robust molecules or compounds. They do enable the desired chemical conversion, but not necessarily in the most sustainable way. To accomplish the latter, more elaborate and sophisticated compounds are being developed that reduce the need for energy, minimise the production of waste and, increasingly, enable the use of biobased feedstock.

At the Van ‘t Hoff Institute of Molecular Sciences in Amsterdam the Biocatalysis group led by Dr Francesco Mutti is successfully pursuing a new and promising approach in which modified enzymes are used as catalysts. Enzymes are large elaborate protein molecules that enable the chemical conversions in living cells, and during years of evolution Nature has produced highly efficient specimens. In biocatalysis first appropriate natural enzymes are identified in microorganisms such as bacteria and yeasts. These enzymes are subsequently optimised for a desired chemical conversion by means of so-called enzyme engineering.  Moreover, enzymes are intrinsically compatible each other and, therefore, they can be combined to carry sequential reactions in one-pot without the need of intermediate isolation and purification steps. Hence, the overall biocatalytic process is more efficient and produce less waste than traditional chemical processes.

Amines (chemical compounds containing an amino group -NH2) are among the most frequently used chemical intermediates for the production of pharmaceuticals, fine chemicals, agrochemicals, polymers, dyestuffs, pigments, emulsifiers and plasticizing agents. During the past decades many academic and industrial researchers have worked on efficient methods for synthesizing these amines starting from alcohols (chemical compounds containing a hydroxyl group, -OH). The new enzymatic method now reported in Science outperforms all other (non-biocatalytical) conversion methods in terms of versatility, efficiency, selectivity and reduction of waste.

The novel method relies on two enzyme classes, alcohol dehydrogenases and amine dehydrogenases that work in tandem (in a so-called hydrogen-borrowing cascade, a process wherein electrons are internally recycled – redox self-sufficient). It possesses the highest possible atom efficiency, sourcing nitrogen from ammonia and generating water as the sole by-product. One particularly important feature is that it gives direct access to highly valuable enantiopure amines which constitute the active core of a large number of pharmaceuticals and fine chemicals.

Another important aspect is that the new ‘artificial enzymatic pathway’ facilitates the use of biomass as a sustainable resource for amines, replacing oil. Renewable resources like carbohydrates or lignin abundantly contain molecules with hydroxyl functionalities. They are also the main functional group of alcohols that are obtained, for instance, by fermentation of biomass.