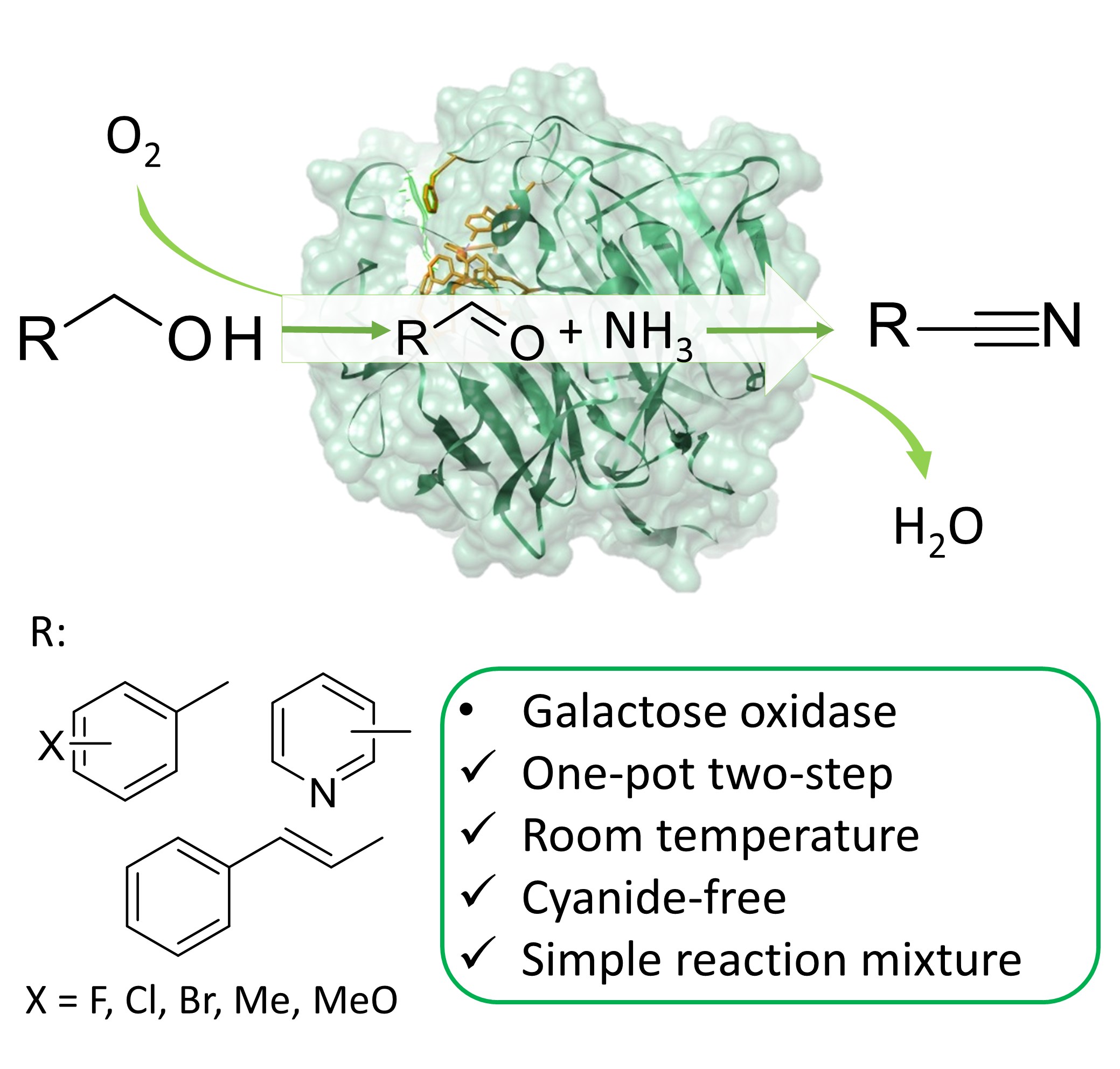 We have discovered an unexpected catalytic promiscuity of the enzyme galactose oxidase and utilized this to develop a one-pot enzymatic transformation of alcohols into nitriles under mild, cyanide-free conditions. A patent has been applied and we published our results in the renowned journal Angewandte Chemie.

It is the first report of a direct enzymatic transformation of alcohol to nitriles. The promiscuous formation of nitriles catalysed by purified galactose oxidase enzyme was discovered by chance, during the study of the enzymatic oxidation of benzyl alcohol to benzaldehyde using plain air as oxidant. When we performed this oxidation in an ammonium formate buffer, a tiny  amount of benzonitrile could be detected and this immediately sparked our interest. We set out to optimize the benzonitrile production and achieved satisfying yields under mild conditions (pH 9, 30 °C, air at atmospheric pressure) albeit with rather moderate turnover numbers. However, switching from purified enzymes to cell free extracts from Escherichia coli bacteria, we were able to achieve a turnover number (TON) up to  ca. 3300, which is a value already suitable for large scale application.

We subsequently have tested the promiscuous enzymatic conversion of alcohols into nitriles with a variety of substrates. It was established that three main families of alcohols can be converted into nitriles using galactose oxidase. Adding to this, we expect that other enzymes comparable to galactose oxidase might show similar catalytic activity but on different type of alcohols. We therefore see great potential for this biocatalytic conversion as an alternative for current industrial nitrile synthesis methods. The advantage of the use of enzymes lies in the absence of toxic compounds (notably cyanide) and the use of an aqueous environment. Furthermore, the conversion proceeds under atmospheric pressures and requires less energy consumption (for heat and pressure) in comparison to chemical methods. Adding to this, no chemical method for the conversion of alcohols into nitriles has a comparable atom efficiency, which means that the biocatalytic method generates less waste. Increasing the conversion above 99% and maximizing chemoselectivity would lead to a reaction mixture of pure nitrile and eliminate the need for further purification steps, which has been already achieved with selected substrates.