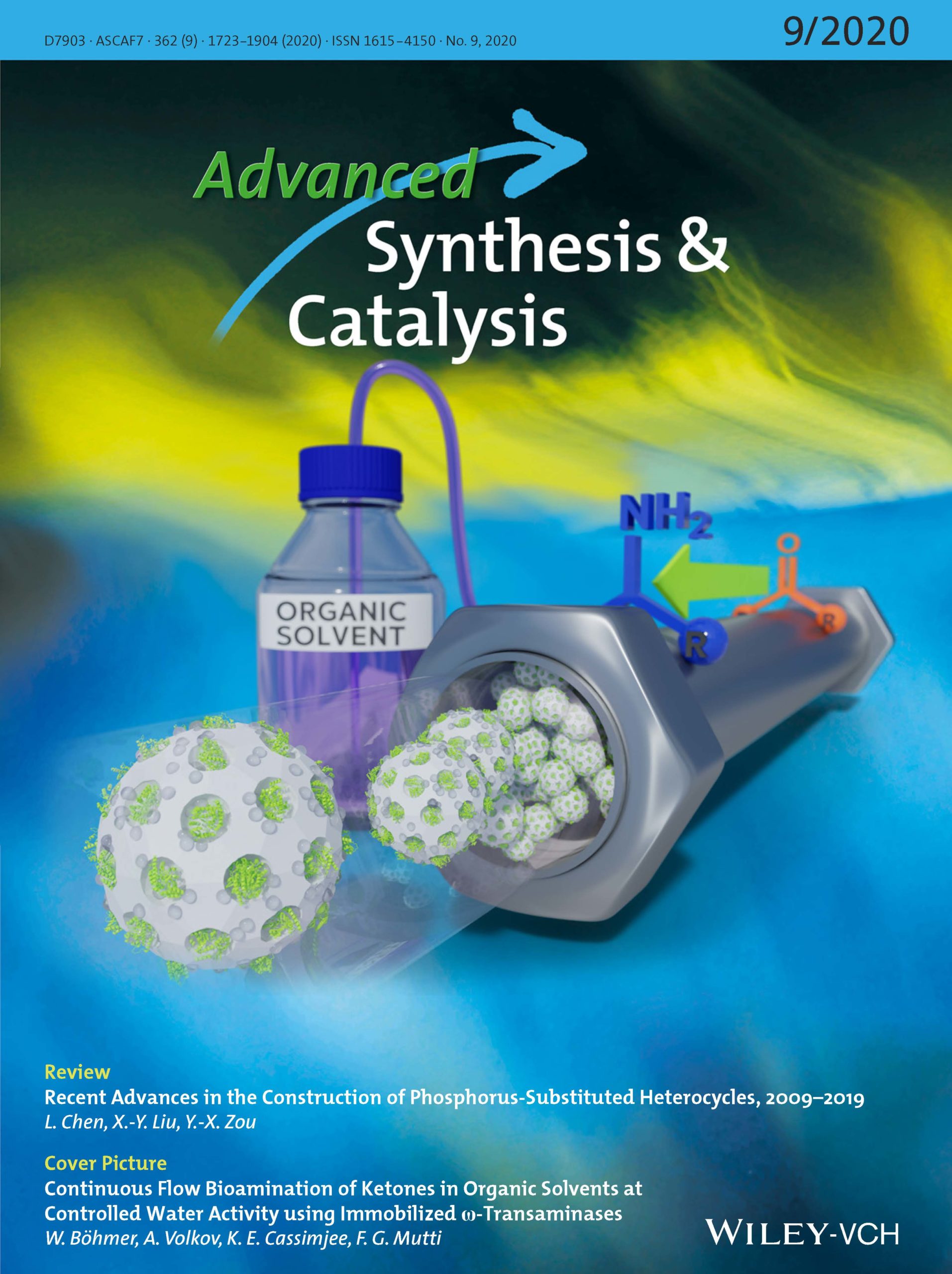 The HIMS-Biocat group presents the first account of applying immobilised ω-aminotransferase enzymes in neat organic solvents and continuous flow system. In a recent paper in the journal Advanced Synthesis & Catalysis, we describe how we achieve high yields in the synthesis of α-chiral amines using this methodology. The paper has been designated as a Very Important Publication and was featured on the front cover of Advanced Synthesis & Catalysis.

Chiral amines are important molecules in chemistry, notably for the synthesis of active pharmaceutical ingredients (APIs). In industry, they are typically produced in batch processes that involve the use of specialised catalysts. However, such processes are not always very effective and often result in unwanted by-products. As an alternative, the field of biocatalysis explores the catalytic use of natural or nature-derived (i.e., engineered) enzymes that offer more atom-efficient and selective synthesis, thereby enhancing product yield and reducing waste production.

An important drawback of most enzymes, however, is the relatively poor applicability or even inactivity in neat organic solvents. These solvents can be preferred over water in many chemical syntheses as they improve the dissolution of hydrophobic starting materials, thus enhancing conversion and reaction rates. While some enzyme families—particularly hydrolases—have been investigated and adapted for their use in non-aqueous environments, the aminotransferase that are very relevant for the synthesis of α-chiral amines could thus far be mainly used in aqueous environments. They have only sporadically been used in non-aqueous media in batch systems.

In this new research, we developed a method for the efficient biocatalytic synthesis of α-chiral amines using immobilised ω-aminotransferases in neat organic solvents and in a continuous flow reactor.

Herein, we were able to adapt the immobilised enzyme system for the synthesis of α-chiral amines from a ketone and an amine donor in neat organic solvents; this work was carried out in collaboration with researchers at EnginZyme AB in Sweden that engineered the carrier materials for enzyme immobilisation. Since dynamic and catalytic properties of enzymes in non-aqueous media are dependent on the presence of a limited but critical amount of water, we applied salt hydrates during both the biocatalyst immobilisation step and the progress of the reaction. The reaction system was investigated in terms of carrier material, organic solvents and reaction temperature. Optimal conditions were found with more hydrophobic carrier materials and toluene as reaction solvent. Under batch conditions, a chemical turnover (TTN) above 13000 was obtained over four subsequent reaction cycles, which is already a remarkable value for the challenging asymmetric reductive amination of ketones.

The applicability of the immobilised biocatalyst in neat organic solvents was further demonstrated in a continuous flow packed-bed reactor. This showed excellent performance without observable loss of enzymatic catalytic activity over several days of operation. In general, ca. 70% conversion was obtained in 72 hours using a 1.82 mL flow reactor. The conversion rose above 90% when the reaction was run up to 120 hours. 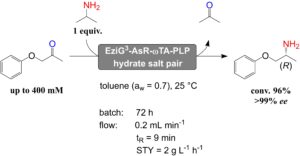 Link to the Front Cover