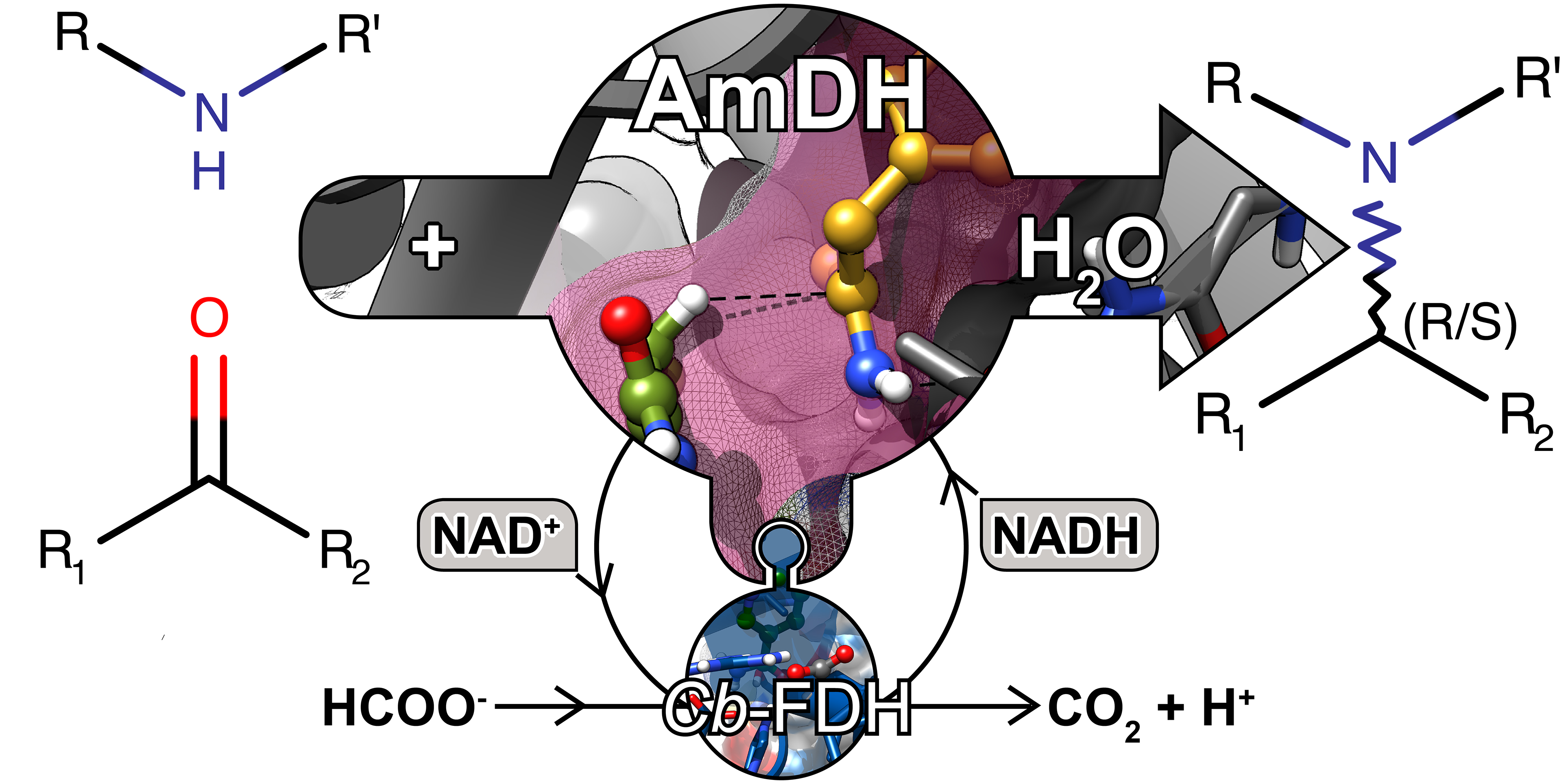 March 2019: A mechanistic study on amine dehydrogenases published in ChemBioChem

The one-step enzymatic synthesis of secondary and tertiary amines starting from ketones or aldehydes is a highly desirable, but also challenging chemical transformation. Amine dehydrogenases (AmDHs) catalyze the reductive amination of carbonyl-containing compounds using free ammonia to yield α-chiral primary amines with elevated atom economy and, very often, perfect stereoselectivity. However, the potential of this class of enzymes for the synthesis of secondary or tertiary amines remains unexplored. In this study, we have investigated two AmDHs for the synthesis of secondary and tertiary amines. Through the combination of practical lab experiments and computational simulations, we gained new insights into the catalytic mechanism of these AmDHs, thus revealing new aspects related to their applicability and current limitations in organic synthesis. Extensive computational studies served as a valuable tool to elucidate the chemo-and stereo-selectivity of the biocatalysts, both properties being of paramount importance for the synthesis of new APIs (active pharmaceutical ingredients).

Results show that—contrary to the common belief—AmDHs accept not only ammonia, but enable the synthesis of secondary and tertiary amines in enantioenriched form using small aliphatic or cyclic-aliphatic amines as amino donors. Nonetheless, we noticed that this transformation was often accompanied by a side reaction, which led to the formation of the structurally related primary amines. We concluded that this promiscuous activity is the result of the catalytic activity of the AmDHs used. In particular, the mechanism entails the formation of the imine intermediate in the active site of the enzymes, followed by a cofactor (NAD) dependent isomerization step. The isomeric imine intermediate undergoes hydrolysis, due to the particular catalytic environment in the active site of the enzyme, thereby leading to the formation of the corresponding primary amine. In summary, with the aid of computational studies, we were able to rationalize the formation of all products observed in the reaction mixture as well as to understand the chemo- and enantio-selective preferences of the AmDHs. The study concludes with a proposed overall reaction mechanism, which is expected to provide fundamental knowledge for guiding the engineering of improved AmDHs possessing better chemo and stereo-selectivity in the synthesis of secondary or tertiary amines.

This article was published in the latest issue of ChemBioChem and it is also part of the ChemBioTalents virtual issue that showcases emerging young scientists that “(cit.) will shape the future of research at the interface of chemistry and biology”.