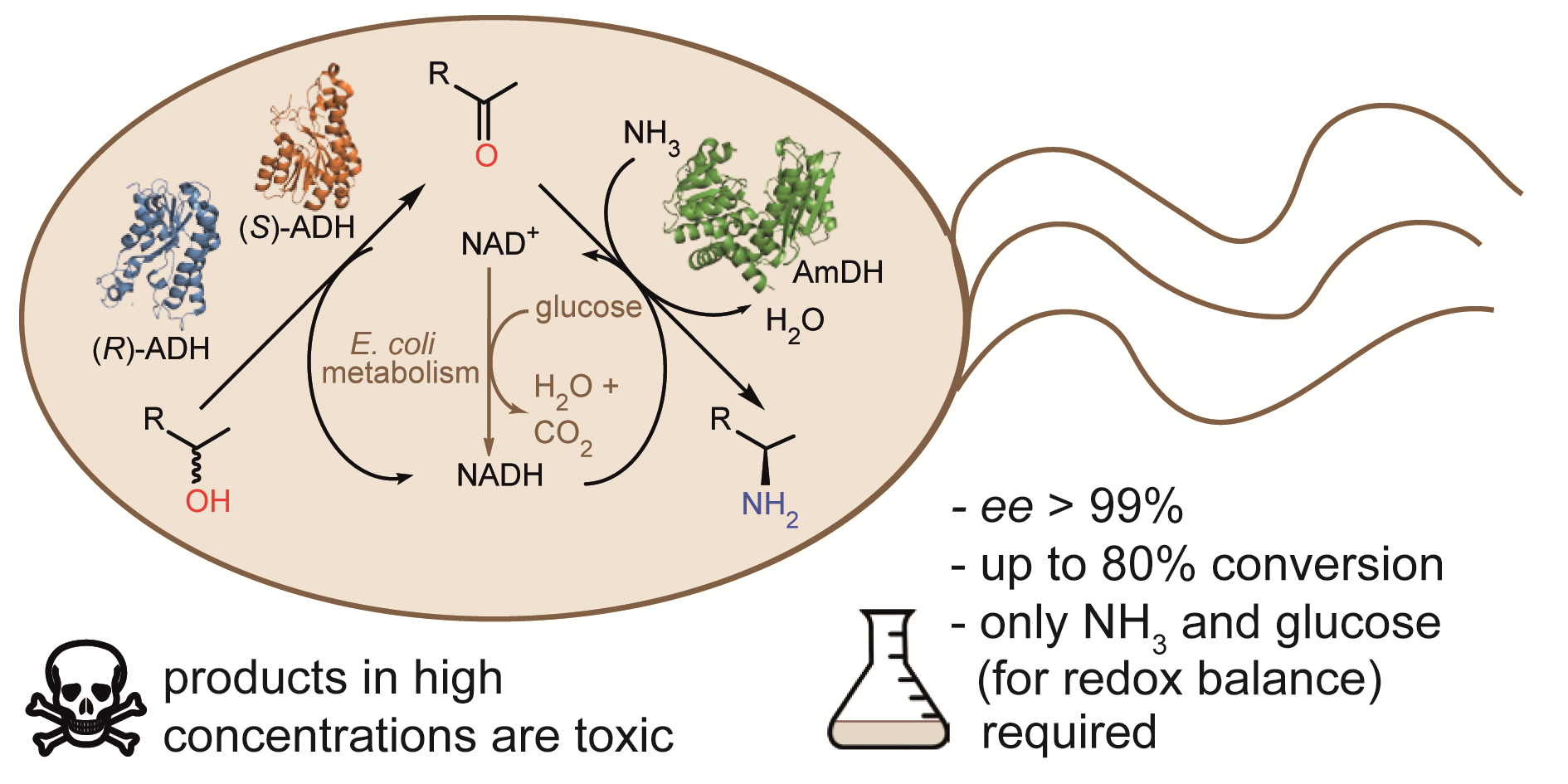 The HIMS-Biocat group presents the first account of engineering an Escherichia coli strain for the in vivo conversion of racemic alcohols into α-chiral amines through the heterologous co-overexpression of alcohol dehydrogenases and an amine dehydrogenase. The paper has been published in the RSC journal, Green Chemistry.

α-Chiral amines are pivotal building blocks for chemical manufacturing. Stereoselective amination of alcohols is receiving increased interest due to its higher atom-efficiency and overall improved environmental footprint compared with other chemocatalytic and biocatalytic methods. We previously developed a ‘hydrogen-borrowing’ amination by combining an alcohol dehydrogenase (ADH) with an amine dehydrogenase (AmDH) in vitro. Herein, we implemented the ADH-AmDH bioamination in resting Escherichia coli cells for the first time. The HIMS-Biocat team created different genetic constructs and tested them with the aim of achieving balanced expression levels of the dehydrogenase enzymes cloned in E. coli without significantly affecting the bacterial metabolism. Thus, optimised genetic constructs were created and characterised.

Using the best constructs, we studied the influence of several parameters towards the productivity of the system: the intracellular NAD+/NADH redox balance, the cell loading, the survival rate of recombinant E. coli cells, the toxicity of the components of the reaction mixture at different concentrations and the influence of different substrates and cosolvents. In particular, the required cofactor redox-balance for the hydrogen-borrowing bioamination could be maintained into the cytoplasm of the cell by adding moderate and precise amounts of glucose. We also noticed that higher concentrations of some of the amine products resulted in toxicity, thus leading to E. coli cells death. We could alleviate this problem by using a co-solvent that acts as a reservoir for the alcohol substrates and as in situ extracting medium for the amine products. Notably, amine formation was consistent using several independently grown E. coli batches, thereby demonstrating the robustness of the production strain. The optimised E. coli/ADH-AmDH strains produced enantiopure amines from the alcohols with up to 80% conversion and a molar productivity up to 15 mM. Practical applicability was demonstrated in a gram-scale biotransformation.

In summary, the present E. coli-ADH-AmDH system represents an important advancement towards the development of ‘green’, efficient and selective biocatalytic processes for the amination of alcohols.