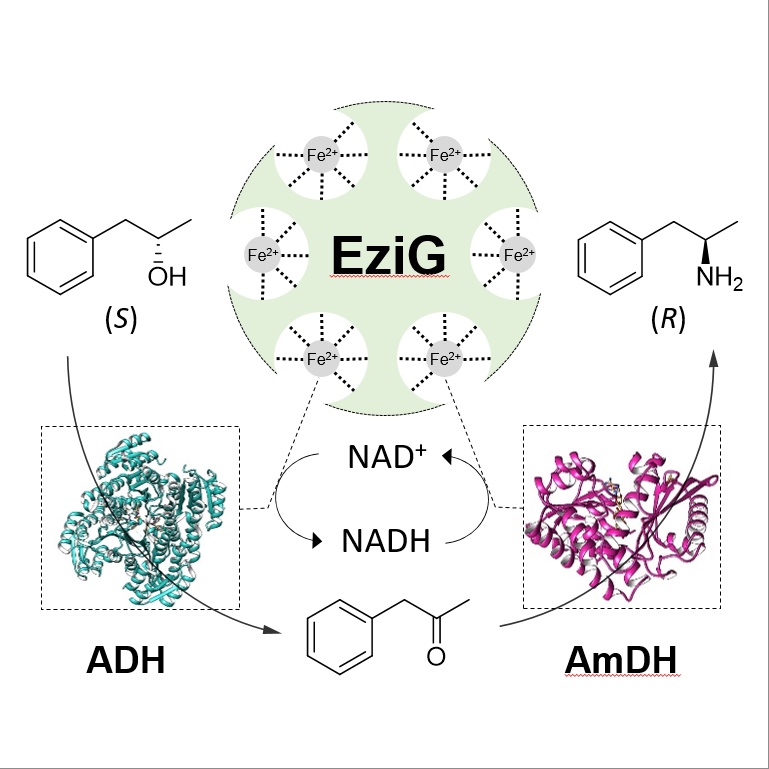 Amines, and in particular α-chiral amines, are important intermediates for the production of active pharmaceutical ingredients, fine chemicals and agrochemicals. Structurally simpler amines are also of interest for the manufacture of polymers, dyestuffs, pigments and other materials. Alcohols are accessible precursors for the synthesis of (chiral) amines. However, the asymmetric amination of alcohols is a challenging transformation in chemistry. Previously, we published in Science that the redox-neutral (i.e. hydrogen-borrowing) asymmetric amination of alcohols is enabled by the combination of an alcohol dehydrogenase with an amine dehydrogenase. Recently, we were able to enhanced the efficiency of this hydrogen-borrowing biocatalytic amination by co-immobilizing both dehydrogenases on controlled porosity glass Fe(III) ion affinity beads. This project was accomplished with the support of EnginZyme AB, a new company specialized in the development of new carriers for enzyme immobilization.

Enzymes are known to be as very powerful catalysts in obtaining high enantioselectivity in many biochemical transformations. That makes them excellent candidates for stereoselective synthesis. Biocatalysts are used in many forms such as whole cell preparation, active cell extract, or purified enzyme. Preparation and especially purification of enzymes involves many laborious steps. Once obtained, a biocatalyst can often be used only a single time in biotransformation. Immobilization of enzymes can confer advantageous properties such as enhanced thermal and mechanical stability, the possibility to recover and recycle the biocatalyst, and sometimes widen the operational window in biocatalytic reactions.

For this work, we have chosen to co-immobilize dehydrogenases on EziG controlled porosity glass Fe(III) ion affinity beads (EnginZyme AB). The material used possesses high porosity that allows for a high enzyme loading capacity (typically 40% w/w), whereas the polymeric coating enhances the enzyme stability during biotransformations. The immobilization of the enzyme can be performed in a short time by exploiting the ion affinity binding between the beads and the poly-histidine tag that is linked to the dehydrogenase enzymes. Immobilization is carried out under the optimal conditions of stability for the enzymes. Furthermore, the enzyme can be immobilized directly from the cell lysate hence not requiring any previous purification step.

In our work, we have co-immobilized an alcohol dehydrogenase and a chimeric amine dehydrogenase for carrying out the hydrogen-borrowing amination of a set of (S)-configured alcohols with ammonia as the amine donor. The performance of the heterogeneous immobilized dual-enzyme system was optimized in terms of catalysts loading, molar ratio between ADH and AmDH, total amount of enzymes per mass of affinity beads as well as substrate concentration. Conversions and enantiomeric excess were comparable or higher than for the reactions with isolated enzymes in solution. As proof of principle, recyclability of the dual-enzyme system was demonstrated in 5 cycles with ca. 2 to 15-fold improvements of TTNs compared to our previous studies with the free enzymes in solution. Preparative scale amination of (S)-phenylpropan-2-ol afforded 90% conversion and 80% isolated yield in 24 h. 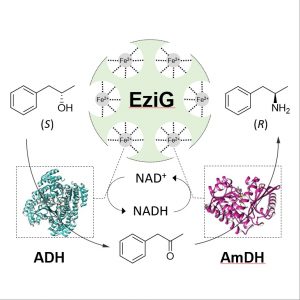 In future work, we will focus on evaluating diverse CPG carriers possessing different polymeric films (from hydrophobic to hydrophilic) as well as improving stability of dehydrogenases in aqueous media. Finally, we are currently exploring the possibility to conduct the hydrogen-borrowing amination with co-immobilized dehydrogenases in flow reactors.