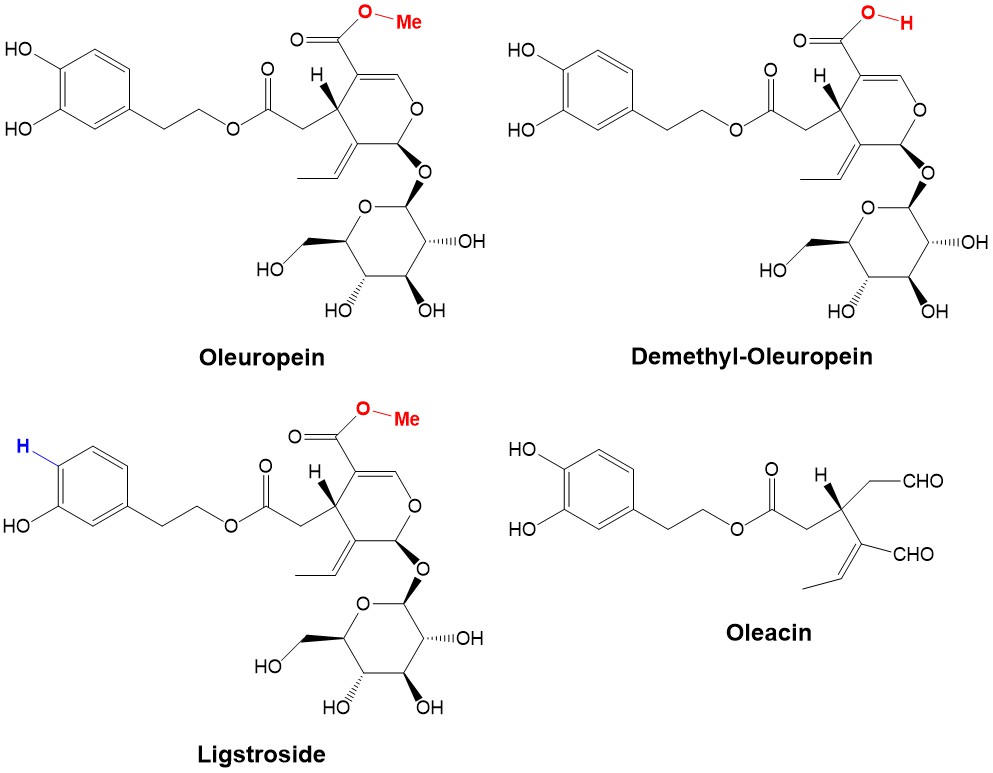 January 2019: An enzymatic method for the selective demethylation of oleuropein

Virgin olive oil (VOO), a primary component of the Mediterranean diet, represents a very important agricultural product because of its economic value and healthy properties. Numerous studies suggest that the regular consumption of virgin olive oil — rich in phenol and flavonoids — reduces the incidence of pathologies such as cardiovascular diseases or diabetes in humans. Recently, it was also demonstrated the positive role of VOO in reducing the incidence of Alzheimer and Parkinson diseases.

The main phenolic compounds present in VOO are secoiridoids, derivatives of hydroxytyrosol and tyrosol. These compounds either occur as simple phenols or are esterified with elenolic acid to form oleuropein, dimethyl-oleuropein and ligstroside.

Oleuropein can be isolated in large amounts from the olive leaves, whereas the derivative dimethyl-oleuropein is obtained in very limited amounts and only during a particular stage of the maturation process. It is assumed that demethyl-oleuropein is produced by nature from oleuropein because demethyl-oleuropein relative concentration increases during the maturation process, while the concentration of oleuropein decreases. However, two additional compounds were recently characterized from VOO to be oleacin and oleochantal. In particular, oleacin is a powerful antioxidant and anti-inflammatory agent whose pharmacological properties and applications are currently the subject of intensive investigations. It is possible to convert demethyl-oleuropein directly to oleacin by established ‘green’ chemical methods; however, the scarcity of demethyl-oleuropein as precursor makes the selective conversion of abundant oleuropein into demethyl-oleuropein highly desirable. In this collaboration with the Organic Chemistry group at the University “Magna Graecia” of Catanzaro, the HIMS-Biocat group at UvA has contributed to the development of an enzymatic method for the ‘green’ and selective demethylation of oleuropein to yield demethyl-oleuropein. Through the screening of a panel of hydrolases, α-chymotrypsyn from bovine pancreas was found to be the best performing hydrolase at pH 7 and 4 °C. Although the yield for the demethylation was moderate (ca. 25% after flash chromatography), the use of a hydrolase allowed us to carry out this challenging hydrolytic reaction in a highly controlled chemoselective manner and applying “green” reaction conditions. Thus, this enzymatic approach improves critically the accessibility of demethyl-oleuropein through the valorization of oleuropein feedstock coming from agricultural waste. The present protocol combined with the catalytic decarboxylation of demethyl-oleuropein mediated by Er(OTf)3, represents the first mixed catalytic/biosynthetic route for the synthesis of oleacin from oleuropein in two steps.