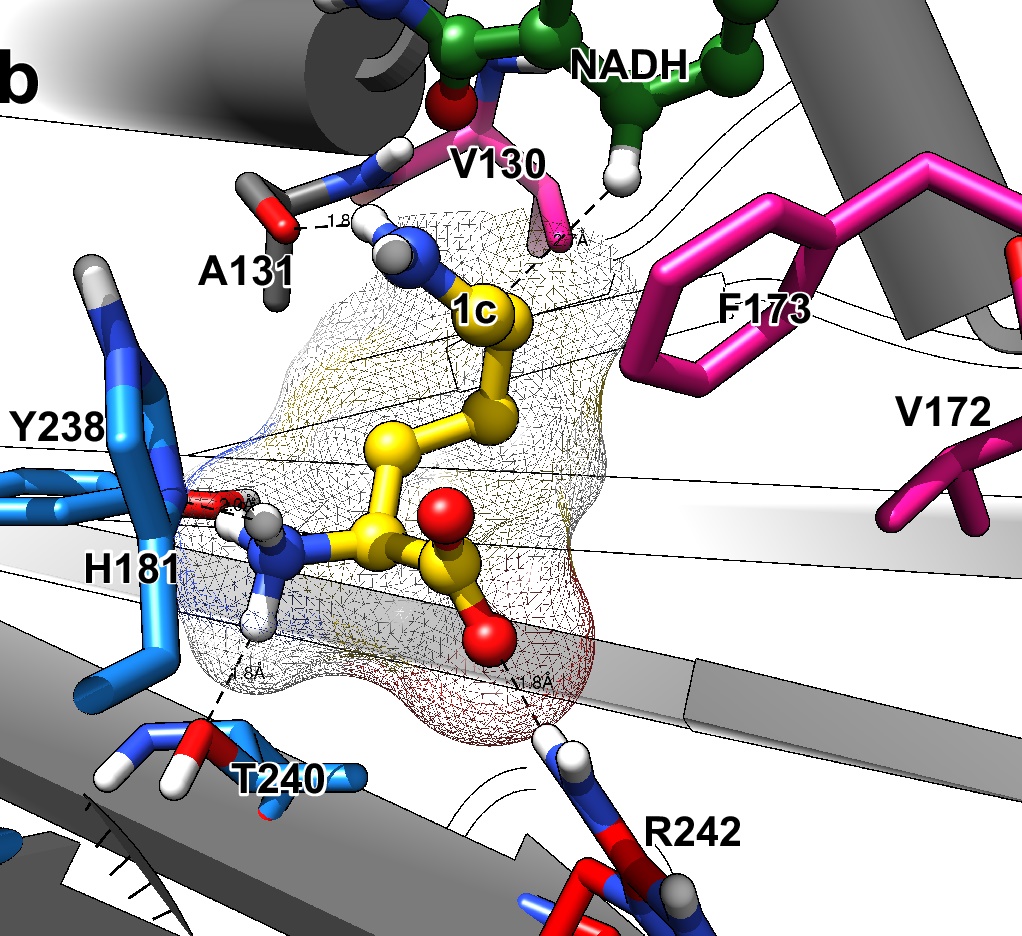 August 2019: The birth of a new family of amine dehydrogenases

By means of structural-guided protein engineering, researchers from the Biocatalysis group at the University of Amsterdam’s Van ‘t Hoff Institute for Molecular (HIMS) have created a new family of amine dehydrogenase enzymes (AmDHs) with unprecedented catalytic properties. The new enzymes are an important addition to the current enzyme toolbox for the synthesis of chiral amines. They are particularly relevant for the synthesis of key intermediates in the production of important pharmaceuticals, rendering their production more chemically efficient and sustainable.

In the current edition of Nature Communications, group leader Dr Francesco Mutti, group members Dr Tanja Knaus and Dr Marcelo Masman and PhD students Vasilis Tseliou and Maria Corrado report that their new enzymes catalyze the asymmetric reductive amination of challenging prochiral ketones such as 4-chromanone, 1-tetralone, 1-indanone, acetophenones and propiophenone. Not only are the reported yields up to the quantitative level, but the amine products are also obtained in an enantiomerically pure form (99% enantiomeric excess or higher). The relevance of the research is illustrated by the fact that the reported amines constitute key intermediates for the synthesis of important pharmaceutical products such as Sertraline, Norsertraline, Rotigotine, Rivastigmine, Cinacalcet, and others.

The HIMS-Biocat researchers rationalized the design of the new amine dehydrogenase enzymes (AmDHs) by exploiting the protein scaffold of the (ε-deaminating) L-lysine dehydrogenase enzyme (LysEDH) from Gebacillus stearothermophillus. This enzyme does not catalyze any asymmetric transformation for its natural reaction. Using state-of-the-art computational tools, the researchers obtained fundamental structural insights on the LysEDH protein scaffold. By exploring the binding of different substrates to its active site, they were able to identify the ‘hot spots’ in the scaffold. They then introduced new amino acids in these positions, leading to new biocatalysts with altered properties such as an increased hydrophobicity and a larger volume of the active site. The new enzymes showed high activity and exquisite enantioselectivity for the synthesis of valuable α-chiral amines.

Generation of an amine dehydrogenase (AmDH)—by enzyme engineering—starting from the scaffold of ε-deaminating L-Lysine dehydrogenase originated from Geobacillus stearothermophilus (LysEDH). The natural iminium intermediate of L-lysine (1c) is depicted in the active site of the wild-type enzyme, whereas the iminium of acetophenone (8c) is depicted in the active site of the F173A mutant enzyme. The mutation point (F173A) is marked in red and the cofactor NADH is depicted in green. It can be observed that once the mutation F173A is introduced, the aromatic ring of 8c gets accommodated into the newly created hydrophobic cavity, which was previously occupied by the phenyl group of F173. That produces an inversion of the chiral preferences of this variant towards aromatic ketones as substrates; (relatively) short-chain aliphatic ketones are also converted with reversed selectivity. This binding mode shift is observed during molecular dynamics simulations for a group of selected substrates, thus confirming the experimental observations regarding the stereo-preferences of this enzyme. Moreover, the mutant F173A exhibits a significantly extended and complementary substrate scope for aromatic substrates compared with its wild-type variant and, moreover, with previously reported AmDHs. Image: Dr Marcelo Masman, HIMS Biocatalysis group.

Compared to previous efforts towards the engineering of AmDHs, the approach of the HIMS-Biocat team was rather unconventional. Previously reported AmDHs were obtained starting from α-aminating amino acid dehydrogenases that already exhibit stereoselectivity on their natural reaction and substrates: α-keto carboxylic acids and α-amino acids. In contrast, the ε-deaminating lysine dehydrogenase now used as a starting point operates through the oxidative deamination of a non-chiral terminal amine group. The HIMS-Biocat researchers thus evolved the new enzymes to reveal and harness a stereoselective behaviour that was ‘hidden’ in the wild-type (i.e., natural) enzyme.

The new approach has several advantages. Not only was the team able to alter (and expand) the substrate scope compared to hitherto available AmDHs, their approach also includes the possibility to exploit different protein foldings and thus obtain different and complementary catalytic properties. Furthermore, the design of new enzyme variants requires less effort while displaying higher structural flexibility in terms of obtainable substrate scope and stereoselectivity. Another advantage is the reduced product inhibition. Finally, the approach offers the possibility to reverse the stereoselectivity of the reductive amination using the same scaffold (i.e., both R- or S-configured amines can be obtained). In this context, LE-AmDH-v1 represents a rare example of substrate-dependent stereo-switchable selectivity of enzymes that HIMS-Biocat researchers elucidated further with the aid of in silico studies.

α-Chiral amines are of great pharmaceutical relevance as they are involved in a variety of biological activities. Over the past years, their importance as building blocks in many Active Pharmaceutical Ingredients (APIs) was highlighted in a large number of scientific reports. It is estimated that α-chiral amines constitute approximately 40% of the optically active drugs that are currently commercialized mainly as single enantiomers. Their share is expected to increase due to stringent regulations for market approval concerning safety and efficiency, which are both directly related to the enantio-purity of the compounds. In general, this is hard to achieve using traditional synthetic chemistry that involves multiple synthetic steps and often requires the use of toxic catalysts. Consequently, various enzymatic methods have been developed that provide sustainable synthetic alternatives. Enzymes offer high stereoselectivity, operate at mild reaction conditions and in general involve only one simple reaction.

In this study, the newly developed AmDHs were used in combination with a formate dehydrogenase to enhance the atom-economy of the conversion. In this context, the AmDH-FDH system enables the efficient reductive amination of prochiral ketones with turnover numbers larger than 1000, while requiring only an HCOONH4 buffer and catalytic NAD+. AmDH-mediated synthesis of chiral amines is therefore very attractive. Furthermore, the amine donor used (i.e., ammonia) is an inexpensive reagent and only water is formed as a by-product of the biocatalytic reaction.

For this work, a patent application was filed in collaboration with HIMS and IXA-UvA.