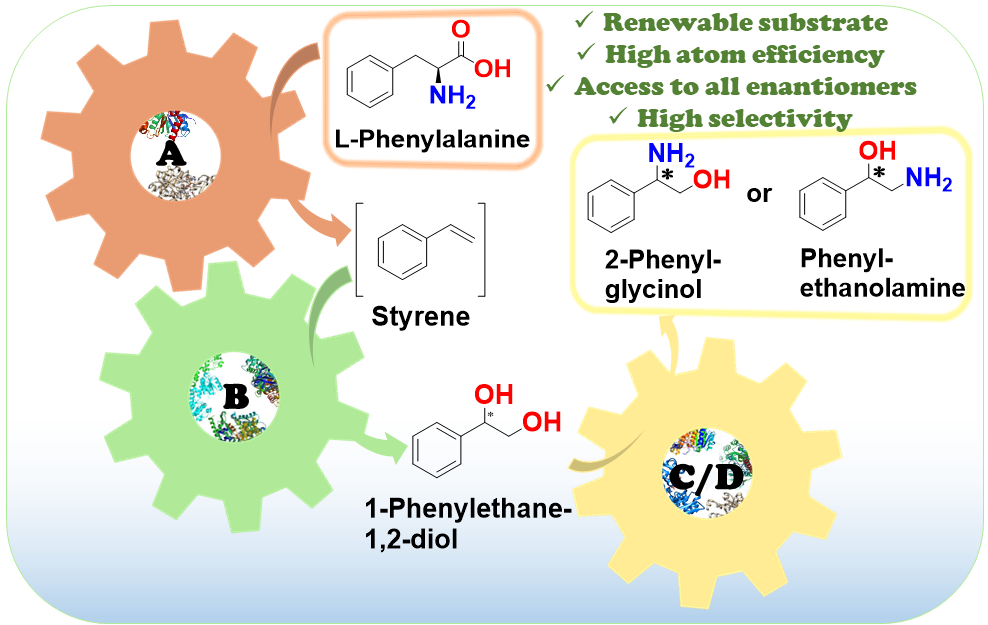 In our paper published in the ACS journal Organic Process Research & Development, we present the concept of using multi-enzyme cascades for the conversion of bio-based, renewable and low-cost substrates into high-value chiral products. As a proof of concept, we describe the conversion of l-phenylalanine into enantiomerically pure 1,2-amino alcohols with a very high yield and atom-efficiency, while generating very little waste products.

The research was carried out in collaboration with the group of Prof. Ulrich Schwaneberg at RTWH Aachen University. The publication will be part of the journal’s Special Issue on “Biocatalysis: Improving Enzymatic Processes through Protein and Reaction Engineering”.

Enantiomerically pure 1,2-amino alcohols are important compounds due to their biological activities and wide applications in chemical synthesis. In this work, we present two multienzyme pathways for the conversion of l-phenylalanine into either 2-phenylglycinol or phenylethanolamine in the enantiomerically pure form.

Both pathways start with the two-pot sequential four-step conversion of l-phenylalanine into styrene via subsequent deamination, decarboxylation, enantioselective epoxidation, and enantioselective hydrolysis. For instance, after optimization, the multienzyme process could convert 507 mg of l-phenylalanine into (R)-1-phenyl-1,2-diol in an overall isolated yield of 75% and >99% ee. The opposite enantiomer, (S)-1-phenyl-1,2-diol, was also obtained in a 70% yield and 98−99% ee following the same approach. At this stage, two divergent routes were developed to convert the chiral diols into either 2-phenylglycinol or phenylethanolamine.

The former route consisted of a one-pot concurrent interconnected two-step cascade in which the diol intermediate was oxidized to 2-hydroxy-acetophenone by an alcohol dehydrogenase and then aminated by a transaminase to give enantiomerically pure 2-phenylglycinol. Notably, the addition of an alanine dehydrogenase enabled the connection of the two steps and made the overall process redox-self-sufficient. Thus, (S)-phenylglycinol was isolated in an 81% yield and >99.4% ee starting from ca. 100 mg of the diol intermediate.

The second route consisted of a one-pot concurrent two-step cascade in which the oxidative and reductive steps were not interconnected. In this case, the diol intermediate was oxidized to either (S)- or (R)-2-hydroxy-2-phenylacetaldehyde by an alcohol oxidase and then aminated by an amine dehydrogenase to give the enantiomerically pure phenylethanolamine. The addition of a formate dehydrogenase and sodium formate was required to provide the reducing equivalents for the reductive amination step. Thus, (R)-phenylethanolamine was isolated in a 92% yield and >99.9% ee starting from ca. 100 mg of the diol intermediate. 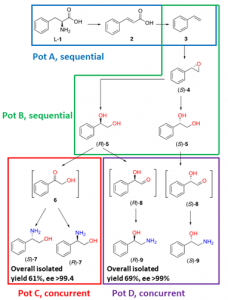 In summary, l-phenylalanine was converted into enantiomerically pure 2-phenylglycinol and phenylethanolamine in overall yields of 61% and 69%, respectively. This work exemplifies how linear and divergent enzyme cascades can enable the synthesis of high-value chiral molecules such as amino alcohols from a renewable material such as L-phenylalanine with high atom economy and improved sustainability.