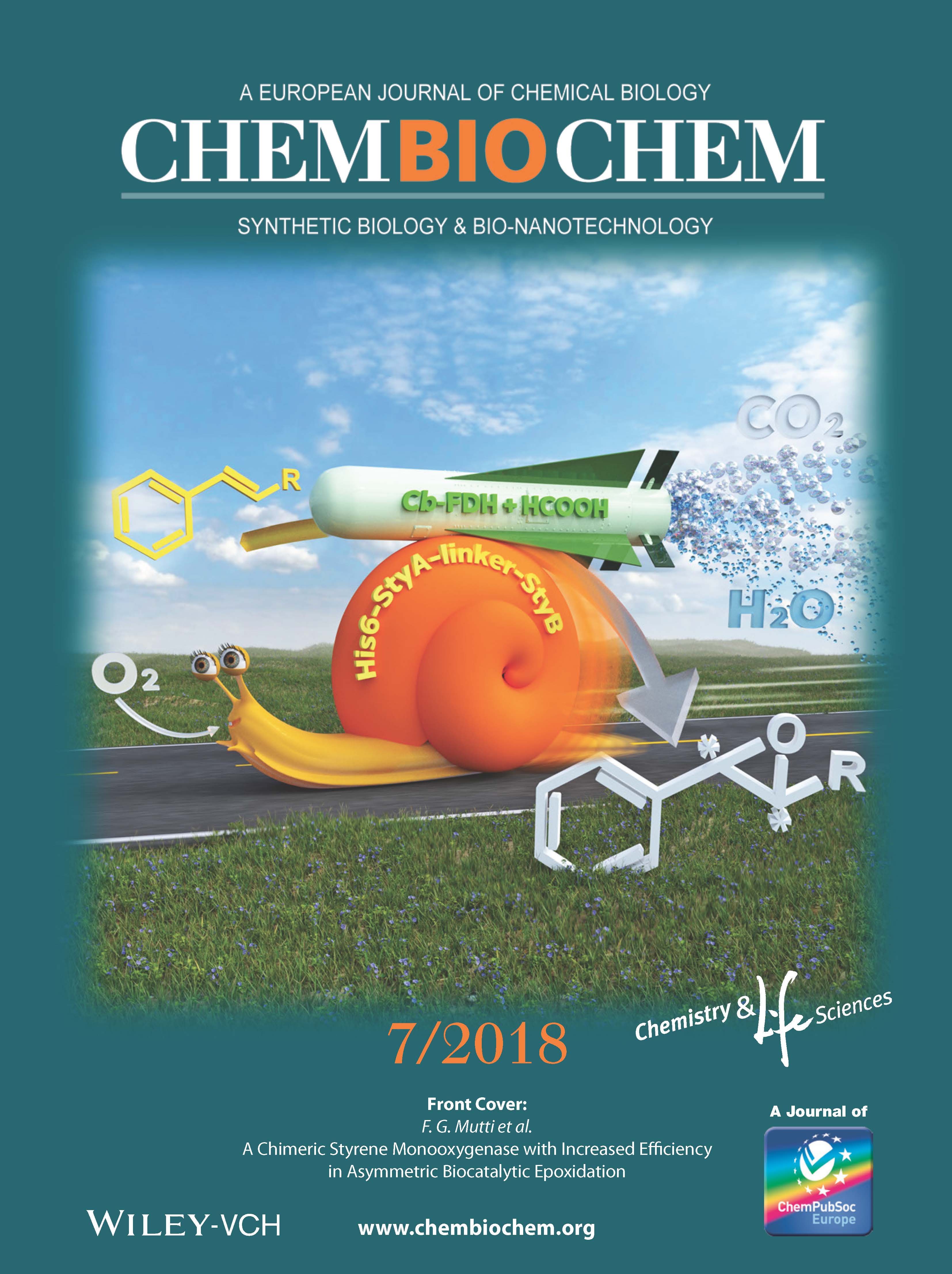 The styrene monooxygenase (SMO) system from Pseudomonas sp. consists of two distinct proteins: a reductase (StyB) and an epoxidase (StyA) that work in tandem. Flavin-dependent StyB catalyses the reduction of FAD at the expense of NADH while StyA is the epoxidation unit. After the transfer of FADH2 from StyB to StyA, reaction with O2 generates FAD‐OOH, which is the epoxidising agent. The wastage of redox equivalents due to partial diffusive transfer of FADH2, the insolubility of recombinant StyB and the impossibility of expressing StyA and StyB in a 1:1 molar ratio reduce the catalytic efficiency of the natural system. Herein, we present a chimeric SMO (Fus‐SMO) that was obtained by genetic fusion of StyA and StyB through a flexible linker and the expression of the resulting recombinant chimeric enzyme (Fus-SMO) in E. coli in elevated amount and active form.

Chiral epoxides are highly versatile building blocks in organic synthesis for the production of valuable compounds, e.g. active pharmaceutical ingredients, natural products as well as other fine chemicals. Despite of significant research efforts and progresses in the field of chemocatalytic and organocatalytic asymmetric epoxidation of terminal alkenes such as styrene and derivatives, achieving elevated stereoselectivity (99% ee or higher) remains still a challenge. On the other hand, enzymatic epoxidation is particularly attractive as elevated enantiomeric excess (>99%) is usually obtained by using molecular oxygen as the sole oxidant. Among the others, the bi-enzymatic system of the FAD-dependent styrene monooxygenase (SMO) from Pseudomonas sp. has been extensively exploited in the past fifteen years for the production of enantiopure styrene oxide and its derivatives in laboratory and pilot-scale.

A comparative study demonstrated that our Fus-SMO is a superior system for the biocatalytic epoxidation when compared to naturally occurring SMO. Thanks to a combination of: 1) balanced and improved expression levels of reductase and epoxidase units, and 2) intrinsically higher specific epoxidation activity of Fus‐SMO in some cases, Escherichia coli cells expressing Fus‐SMO possess about 50 % higher activity for the epoxidation of styrene derivatives than E. coli cells coexpressing StyA and StyB as discrete enzymes. This is due to a combination of different factors, mainly, the equimolar expression of StyA and StyB. The epoxidation activity of purified Fus‐SMO was up to three times higher than that of the two‐component StyA/StyB (1:1, molar ratio) system and up to 110 times higher than that of the natural fused SMO which may be due to the close proximity of the subunits which leads to a higher coupling efficiency. These aspects, along with the influence of O2 pressure on the performance of the epoxidation system, were investigated in order to assess the optimal conditions. As last, a further improvement of the whole cells epoxidation system has been the co-expression in the same host organism of the Fus-SMO together with formate dehydrogenase (Cb-FDH) as internal NADH recycling enzyme, which operates at the expense of sodium formate (HCOONa) as the final source of the required electrons (hydride). Hence, the biocatalytic system is capable of performing the asymmetric epoxidation at the expense of sodium formate, as the hydride donor, and dioxygen. CO2 and water are the sole by-products. We have also applied the Fus-SMO, used as lyophilized whole cells, for the conversion of styrene and derivatives into the correspondent chiral epoxides. The enzymatic process is carried out in a biphasic aqueous/organic solvent system leading to high conversions (up to 99%) and exquisite ee/de (>99%). As last, the enzymatic system has been used in the production of enantiopure epoxides in preparative scale (ca. 0.5 g).

Link to the Front Cover (The front cover picture was prepared by Verena Resch (Luminous Lab). Sketch of the graphical abstract was made by Francesca Cimadoro.)